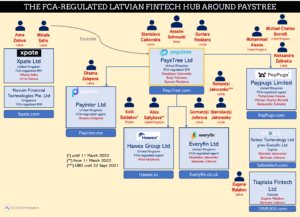 PaysTree Ltd was founded in December 2018 by Latvian Mihails “Mike” Safro (pictured left), who was initially registered at UK Companies House as both a director and controlling person. He managed to make the company an FCA-regulated e-money institution regulated. In Summer 2019, Safro resigned from PaysTree to establish Xpate Ltd, another FCA-regulated EMI (PC42 profile).

In 2020, the company had 21 employees, most apparently in Latvia, as the LinkedIn connections suggest.

Hawex Group Ltd was founded in July 2021 by Russian Kirill Badakov, who was also registered as the company’s beneficial owner. With the beginning of the Russian invasion of Ukraine, Badakov has withdrawn, and London-based musician Alisa Saltykova is now officially the beneficial owner.

Video: The Wirecard Trial And The Hidden Truth!

Video: About Being A CyberFinance Rating Agency