Paytm was founded in August 2010 with an initial investment of $2 million by its founder Vijay Shekhar Sharma in Noida, a region adjacent to India’s capital New Delhi. It started off as a prepaid mobile and DTH recharge platform, and later added data card, postpaid mobile, and landline bill payments in 2013.

Paytm is available in 11 Indian languages currently and offers online use cases such as cell phone recharges, electricity bill payments, travel, movie and event bookings, and in-store payments at grocery stores, fruit and vegetable stores, restaurants, parking lots, toll booths, pharmacies, and educational institutions using the Paytm QR code. PayPal filed a complaint against Paytm with the Indian Trademark Office on November 18, 2016, for using a logo with a similar color combination to its own. In January 2018, Paytm was being valued at US$10 billion.

In June 2022 Paytm has reportedly begun charging some of its users a small fee for mobile recharges done via the financial platform. This charge can be anywhere between Re 1 and Rs 6, depending on how large the recharge amount is. 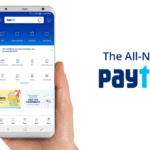